Background
Due to the socio-economic changes going on in Korea society(see ecnomy under Japanese rule,more and more Koreans were coming to Japan for better lives. Japanese government restricted Japanese companies to recruit Koreans to work in Japan by law because she was afraid Japanese unemployment rate would increase. The Korean newspaper, Dong A libo on Sept 9th in 1921 criticised this law severely , saying that it is descrimination and insulting. In response, Japan government abolished the law.But the government still regulated koreans to come to Japan, in 1924, may 5th, 50000 Koreans protested at the Pusan Port againt it.
toron

WWⅡ was coming near.
In 1938 the national mobilization act was inacted.link


April 1939
The law took effect for the Japanese,

In 1944 the law took effect for Koreans.
.
Those Koreans were never hand-cuffed nor kidnapped to the laboring sites as some koreans imagine.When Japanese young men had been drafted to the battle fields, the work force was desparately in need. Some Koreans had to work hard at such a place as coal mine. But those who worked under hard condtions were paid more than average Japanese workers.
.
It is estimated that there was 2100000 Koreans at the end of the war in Japan. 8 to 10% were brought to Japan under the law.
After the war, all of them could go home at their free will, but 410000 Koreans remained in Japan in1950 .
It would be reasonable to suppose that majority of Koreans who came against their will under the law went home because those who came after 1944 had no life bases in Japan, could not speak Japanese well and left their family behind in Korea..

In conclusion, Koreans who remained in Japan were those who came to Japan volountarily.
This is generally in accordance with what the first generation of Korean Residents in Japan says about it.

(BTW the problem is that Japanese and Korean governments did not give them chances to choose Japanese citizenship,I am inclined to think J and K governments should have [2])

Travolta,
>I also read that many of those women stayed in Japan after the war which explains the Korean population in Japan today.
No, the mobilized people were young men or women (some only girls), and nearly all of them returned to their families in Korea, since the longest any of them could have been in Japan was 6 years, not really long enough to be formly rooted. Plus, free transportation was offered by the Japanese government to all Koreans returning to their country under GHQ orders.

The tight restrictions on Korean immigration to Japan was not lifted until September 1939, when companies were given the freedom to recruit Korean laborers (自由募集). Then, conspription for military laborers (軍徴用) started in 1941, public procurance for businesses (官斡旋) in 1942, and finally conscription for businesses (徴用) in September 1944. Refusal of conscription was the only one punishable by law. Approximately 1 million Koreans were in Japan when the war began. At the end, there were 2 million. Of the 1 million that came to Japan during the war, 700,000 came voluntarily seeking for jobs. 300,000 came by procurement or conscription. 75%, or 1.5 million, returned to Korea after Japan’s defeat.

Before 1939, the Japanese government restricted Korean immigrration because it would cause an unemployment issue from the resulting influx of cheap labor. The Koreans actually flocked to Japan, and when the restriction was temporarily abolished in 1922, Koreans came in floods. The government quickly reinstated the restrictions, and the Koreans responded by holding a 50,000-people rally at the port of Busan on May 17, 1924, but the government stayed firm on its policy. However, Koreans still entered illegally into Japan, and records show that in some years, nearly 10,000 were captured and deported. I think if you looked at the present California-Mexico border situation, you would get an idea of how it was.

As for the sufferings, I’m sure they weren’t fully pleased about the annexation. I’m thinking that it must have been like how China is now. China as a country is certainly prospering, but the wealth is not going around evenly, and in times of turmoil, some win, some lose. I’m sure the winners are keeping their mouths shut now lest they be called collaborators, and the losers the one loudly attacking Japan.

Koreans in Korea did not have the right to vote in Japan, but neither did the Japanese living in Korea. Koreans legally living in Japan had voting rights, and two even made it into Congress. I have seen past records of local elections, and there were plenty of Korean candidates on them.There was racial discrimination, however. The army took Koreans and had one lieutenant general and plenty of officers who had graduated from the military academy, but I hear the Navy refused to have Korean officers.
two cents at occidentalism

South Korea’s 680,000-member military has been marred by a long history of human rights abuses of rank-and-files. Song’s son surely fell victim to the system.

Military records show that 134 South Korean soldiers took their own lives last year in the face of harsh discipline such as beating and verbal abuse. The military again came under public fire earlier this year when an Army captain was found to have had 192 trainees eat human feces as punishment for not flushing toilets.

Analysts project a different picture, however. "The statistics may be a welcome sign, but human rights abuses in the military is still a serious problem,”said Lee Gye-su, a law professor at Kunkuk University in Seoul

Several reservists interviewed weeks after completing their military service agree that various forms of physical and other types of abuse still exist in military camps. “I was slapped and got kicked in the shin by my superiors many times whenever I got scratches on my truck. But I felt I was lucky, because I heard from my friends they were struck by steel pipes,”said a 24-year-old former sergeant who served as a truck driver in a frontline unit.Yonhap, March 29, 2005

I had a friend who served together mandatory military service. He was no less disgruntled than I for the treatment of soldiers by the Korean government. (We were paid 10 dollars per month for full time service. And many Korean soldiers still live in a single room which accomdate 10 to 20 people. Shizophreniac environment I dare say.)Urbanara

The substandard living conditions that ROK enlisted soldiers must endure for their 2-year stint (30 soldiers share a 10 pyong room sleeping “pigs-in-the-blanket” style (which is not only unsanitary and a public health problem contributing to everything from athlete’s foot to tuberculosis, I believe the deprivation of personal space and the absence of individual bunks (or racks) lends itself towards rapes and encouraging homosexual behavior);HKIM in Asisan pages 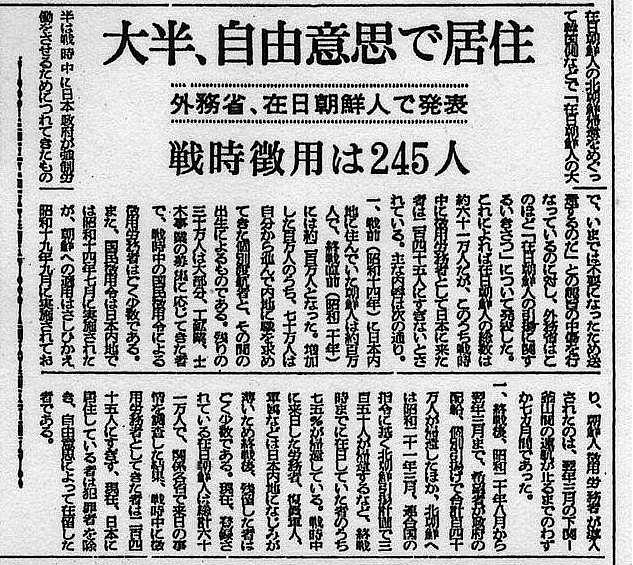 The total number of Koreans in Japan is 610000 but those moblized during the war as workers are only 245.木村幽閉記

matt,
wow this is old article but…
it is true that many zainichi koreans are involved in illegal activities and groups… and many of them are currently leaders of some smaller groups.

I don’t think the main reason is because of their poor living conditions. I think its the role models like Rikidozan, Mas Oyama, etc who were involved with Yakuza etc.
Roppongi is basically made into what it is today by the Yakuza which Rikidozan was involved in. I think that’s why there are so many zainichi in these groups.

I found a movie called 血と骨 which is basically about

This amazingly gritty saga of the formidable rise and demise of Kin Shunpei, a Korean immigrant to Osaka, Japan in the 1920’s depicts not only the struggles and victories of the early Korean immigrant communities within Japan but also the almost unwitting emergence of a highly entrenched (Korean-immigrant-based) Yakuza presence which (it is said) exists to this day.

oh plus… there is prob a lot more Koreans in Japan excluding the ones who were identified because many came in illegally, or just don’t want to think that they are koreans I guess. At least half koreans…Kojimob at occidentalism

The governer of Cheju, however, privately told American intelligence that 60,000 had died, and that as many as 40,000 had fled to Japan ; officially 39,285 homes had been domolished,but the governer hought "most of the houses on the hills" were gone : of 400 villages , only 170 remained. In other words, one in ecery five or six islanders had perished and more than half villages been destroyed.page223 Korea's place in the sun