Gusts Of Popular Feeling
It was an interesting post. You might want to take a look at it.
And also interesing was the comments.

n the final shot of the film, Bun-ok’s face is just as mysterious. Again, she’s neither happy nor sad, though perhaps the beginning of a smile can be discerned. Is this failure to cheer of bemoan his departure an example of sullen resistance to the Japanese propaganda effort (and censorship)? Or does it reflect a time when people were less likely to show emotion in public?

Iguess the blogger is young. Or may he is projecting his hope that Koreans did resist into the woman's face. My reading is that the woman had a mixed feelings: she'll miss the man, but she cannot express it at the time. That all happened to Japanese women at the time.

Whatever might explain the above shot, this shot is worth looking at:
The Japanese character (the one who told Choon-ho about the opening of the military to Korean volunteers) would likely be termed a caricature of a Japanese person today, except that this film was made at the height of the Japanese military control over every aspect of society in the Japanese empire. What the censors missed was this: in the final shot showing the Japanese character, he’s standing next to the crafty Kim Deok-sam and his sons, who were so clearly identified as the ‘bad guys’. Perhaps, in 1941, that was as much resistance as anyone could hope for.

Here again probably the blogger is reading too much.

The films are all so full of aspects and nuances that are fascinating from a historical perspecitve. For instance, did you notice that all the characters have Korean names. Except for a few in HOMELESS ANGELS who have Western names (Baptized names, I guess). Whatever happened to the Japanese forcing Koreans to change their names?

Right . What happened to the Japanese forcing Koreans to change their names?
Posted by zero at 11:58 PM No comments:

Let me make myself clear on this issue. I think that the inconvenience should be cleared for the finger printing system. I don't want to wait for hours to enter Japan, or the U.S. In particular, I don't think there is a need to fingerprint every time people enter the country:if you record once, that'll be sufficient. I reserve the judgment whether the system per se is justified or not:I want to examine pros and cons more carefully.
And I think Gaijin has every right to protest against this system:it helps Japanese to understand the issue, and it helps JG to improve the system.
Now here is Mr.Arudou Debito's way to protest against the finger printing system.
Debito.orgcashe

I am receiving links to angry diatribes on the Fingerprint policy in the Blogosphere. Two that leave a lasting impression:

And here is the one that is problematic.

cashe
Now I happen to be opposed to Japan's bid for The Olympics.
But just look at the site.
To me it is just a site filled with hatred, lies, half-truth.

Don't do business in Japan.

Your crime is being a foreigner!

Welcome to the land of Government sponsored xenophobia!

These are his extreme right wing neo-nazi supporters longing for a return to the glorious days of the Japanese Imperial Army.

I don't approve ishihara's remarks on Gijin, but the statement above will constitute the crime of libel.

Japan is the sick man of Asia now

Any favour you want, from having a railway stop put in near your house, to having laws passed in the Diet, to having your political opponent eliminated, is available for a price.

D: Dango (Public Works Bid-Rigging) Corrupt politicians get 3% of the bid price as a favour for rigging the bid. Dirty business indeed!

E: Education (Failed System) The Ministry of Institutionalized Incompetence. Students learn "how to be Japanese" at school. That's all! Obedience, marching and conformity!

F: Fuji-san (The World's Biggest Toilet) 900,000 People a day climb Mt. Fuji in July and August. There are no chemical toilets, so all the effluent stays on the mountain surface. Someone who fell last year got tetanus from a scrape on the ice.

G: Gaijin (Foreigners: NOT Japan's Main Problem) Whenever there has been a crime committed the racists shout "foreigners!" The jails are 99% full of Japanese, many on death row for mass-murder. Foreigners are NOT the problem!

I: Ijime (Bullying At All Levels Of Society) Overseas bullies are punished. Here the bullied are the bad guys. many children commit suicide because of being bullied. Company workers are also bullied by their superiors

M: Money Politics (Government-Wide Corruption) Cash is preferred, as it can't be traced. At least in China they get a bullet behind the ear. In Japan they get promoted.

And Debito san was impressed.

You can read on and judge on yourself. But I'll tell you, as far as I know, they are half-truth and mostly lies and filled with hatred. Notice that Debito san knows it.

Asked if these are true statements, Debito san's answer is

NOW TRY TO EMPATHIZE WITH THE NJ FOR A CHANGE–DON’T FALL INTO THE VICTIM COMPLEX ALL OVER AGAIN.

Asked if this is justified,

SOMETIMES I REALLY MISS THE FACT THAT THERE IS A DEARTH OF IRONY IN THIS SOCIETY.

What do you think?

To me, it is just as bad as gaijin Ura file. Debito san used to accuse.
Why the hell he picked up this site which protests against the bid for The Olympics
with lies and half truth and hatred in order to protest against the fingerprinting system is a mystery.
Anyway, gaijin-san, sorry, next time you hear unfounded accusations about gaijin, complain it to Debito-san and he'll tell you----if he is logical, that is,--- " NOW TRY TO EMPATHIZE WITH THE Japanaese FOR A CHANGE–DON’T FALL INTO THE VICTIM COMPLEX ALL OVER AGAIN, DON'T YOU MISS THE FACT THAT THERE IS A DEARTH OF IRONY IN THIS WORLD？."

It is really regrettable, because his basic message was right, and it will make people sad that it seems, ,he is being possessed by the dark force.

The followings are the newspaper articles at the time that says the local agents abducted Korean women to sell them to the private brothels and the comfort stations for the military men and Japanese police regulated the illegal agents.
via 杉野洋明極東亜細亜研究所 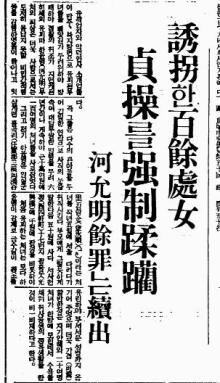 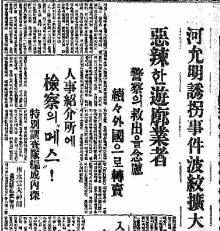 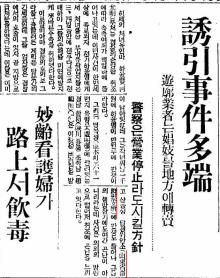 Jeff Kingston, director of Asian Studies at Temple University in Tokyo, says most Americans do not understand how sensitive the abduction issue is in Japan.

Washington's decision not to sell the advanced F-22 aircraft to Japan is highlighted by some as evidence that the US does not "trust" Tokyo.

Others suggest that US efforts to enlist China to "co-manage" Asia with the Japanese has upset those in Tokyo who fear that they are being taken for granted.

"We have politicians who cannot resist grovelling when they meet up with their American partners and I think Japanese people are starting to be irritated," she says.


"It is not that they have anything against the Americans as such," she says. "I think what the Japanese want to see is a more intelligent set of people willing to speak their minds towards their best friends in the world." BBC

BBC has a good point , which it seldom does.
Posted by zero at 10:12 PM No comments:

Chinese sub pops up in middle of U.S. Navy exercise, leaving military chiefs red-faced
By MATTHEW HICKLEY - More by this author » Last updated at 00:13am on 10th November 2007

He said: "It was certainly a wake-up call for the Americans.

U.S. Army deserter Charles Jenkins, right, shakes hands with a girl as he joined a sales event in Tokyo on Friday for rice from his Japanese wife Hitomi Soga's hometown Sado island, Friday, Nov. 9, 2007. Jenkins, who spent nearly 40 years in the North after fleeing his Army unit in 1965, served a month in jail after arriving in Japan from North Korea in 2004. (AP Photo/Kyodo News)

Keep itup, Mr.Jenkin.I'll support you!!
Posted by zero at 8:26 PM No comments:

We will welcome the fan of Japanese culture.
Marmot hole
This Korean American gentleman seems to be an expert on Japanese pervert culture.
I would like him to tell us what Japanese equivalent of the full salon is.

Update;This blog is honored to be mentioned in The Marmot's hall.


This Korean American expert on Japanese pervert culture says he knows the Japanese equivalents of those term mentioned above .
Now I would like to ask Japanese people if you know them.
Room Salon? ルームサロン????
ソウルでルームサロンといえば、韓国人も時々行きますが
値段が高くて一般の方はほとんど行けません。

Room Salon is where Korean people visit, but average people cannot go because it is too expensive. It is similar to Karaoke room but it is bigger and beautiful and the atmosphere is gorgeous;Korea women are waiting for you.

Sexy bar セクシーバー?
「セクシーバー」とは、 アメリカのストリッパーなんかが、 つかまったり脚を絡めたりしてるあのポールだ。
Sex bar is a poll that a stripper wind her legs in American movies.

Anyway I am sure he must be an expert on the subject in Korea and American culture, and I am also sure, judging from his earnestness on the subject, he will get more accurate knowledge of Japanese pervert culture. Welcome to Japan!
Posted by zero at 4:31 AM 5 comments:

The union said in Tokyo that it has also started accepting donations to help Nova teachers who find themselves destitute and face being evicted from their homes, said Bob Tench, president of the Nova branch of the National Union of General Workers Tokyo Nambu.

"Why are we doing this? People have no money . . . they have no food," Tench told reporters at the Foreign Correspondents' Club of Japan. "This is a crisis that is rapidly turning into a tragedy."
JT

Let's do what we can do and pay attention to the next notice they'll make.
Posted by zero at 2:49 AM No comments: