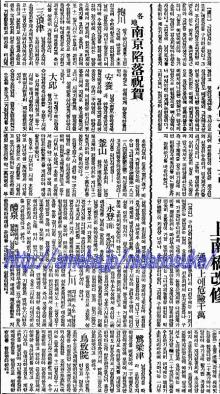 1937.12.24 Donga ilblo report the big cities such as Daegu, Busan, Incheon,celebrate the fall of Nanjing to Japanese army.

The Dong-a Ilbo (literally East Asia Daily) was founded in 1920 by Kim Sung-soo who also founded Korea University during the Japanese occupation of Korea. Later, Kim also served as the second vice-president of South Korea in 1951. DongA Ilbo started as a nationalist paper

* 1920-04-01 : Published the first issue along with the civilization policy of Governor-General of Korea
* 1920-09-25 : The first suspension for indefinite period of time: for printing the article "Discussing the Problems with Rituals" which were critical of three items sacred to Japan
* 1926-03-06 : The second suspension for printing a message celebrating the March 1 uprising (Civil Movement)
* 1930-04-16 : The third suspension for printing "The Dong-A Ilbo Plays an Important Role in Chosun's Current Situation" which was a letter sent by a press in US in support of Korea
* 1931-03-21 : Held the 1st Dong-A Marathon Games, Korea's first marathon race
* 1936-08-29 : The fourth suspension: for erasing the Japanese flag from Korean born Olympic gold medalist
# 1940-08-10 : Forced closure by the Japanese government
# 1945-12-01 : Re-opening of DongA Ilbowiki

この本は國民党の機密文書に基づいている
這個書按照國民黨的機密文件
this book is based on the confidential document
of the guomindang（chinese nationalist party）.

analyzing the “photographic evidence”
of the nanking massacre